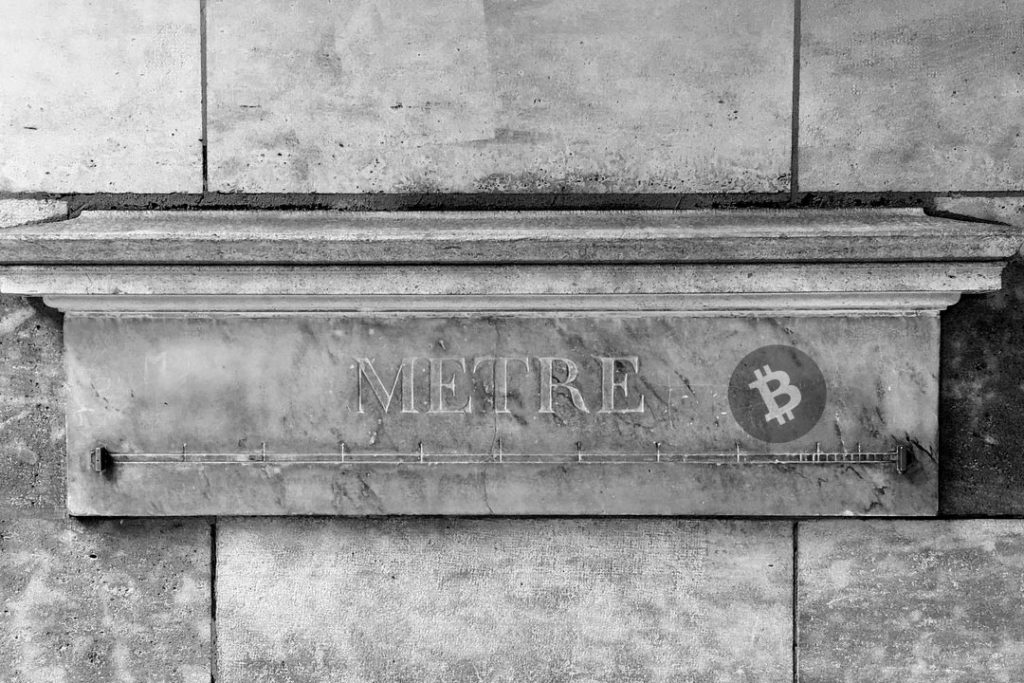 Have you ever wondered whether the folding ruler you have at home is really as long as it says it is? And how do you find out whether it is? Tricky question – complicated answer.

The purpose of this article is to show why #Bitcoin represents the first and only economic measurement system of humankind. The particular challenges it overcame are similar to those presented themselves in length measurement history. This is why the development of the metric system is a fascinating analogy.

Many people see the fixed limit of 21 million whole units and 100 million sub-units (Satoshis) almost like a “fun fact,” an arbitrarily chosen scarcity element. On the contrary, however, the 21m limit is at the core of everything. But let’s go back a few thousand years first.

The history of the measure of length must be understood analogously to other units of measurement such as weight or volume in the context of standardization. Defining standards has always engaged humans, and it simply grew out of the necessities of a more complex organization.

The founder of the Chinese Empire, Qin Shi Huang (260 to 210 B.C.), introduced fixed standards across multiple fields. For example, he defined fixed units of length, units of weight and even set standards for the haircuts of the soldiers.

Warfare was a significant factor in the quest for standardization, but trade and crafts also played an overriding role. In the Roman Empire, fixed standards were necessary simply because of the size, complexity of buildings, and extensive trade relations. The Romans had a total of 14 units for the measurement of length. The basis was the “pes” or Roman fort, 296mm long. However, the reference, or original measure, for the Roman foot is unknown. Some objects were defined, but still, they differed to a small extent.

However, the scientific revolution, which began with Copernicus in the 16th century, later made more accurate, uniform, and universal units of measurement necessary. For example, Isaac Newton still used the Paris “pied de ROI,” or Paris’s foot, about 324.84mm long, for his main work Principia (1687). At the same time, there was the “Paris line, “which was 1/144 of the pied – mainly used by clockmakers. There were all kinds of different “lines “to measure length. And even though it has always been possible to calculate between different units, there was inaccuracy. Similar to different currencies in countries or regions, the diversity of units was an obstacle.

The scientific revolution dominated the zeitgeist of the 17th century. Newton’s laws and many other writings promoted new rational thinking. So naturally, it wasn’t far from the Enlightenment to the French Revolution. This historic event was, interestingly enough, a kind of big bang of length measurement. Because during this time, the first metric system of units was introduced as a universal unit of length in 1793, at the suggestion of the Academy of Sciences.

The introduction of the standardized meter was the first attempt to design a universal length system for humankind. The meter was established as the ten-millionth part of a quarter of the circumference of the Earth but measured through Paris and the North Pole. However, the fundamental problem was to have the length reliably recorded somewhere.

The first solution was to transfer the length to a metal rod with markings. There was actually an original in Paris. The problem was that the measurement had to be precisely correct – and that there was only one reference for it, which everyone could not verify – don’t trust, verify?

However, the second sample of the meter, from 1799, was considered to be the “original meter.” It was a gauge block made of platinum-iridium. But the meter was fragile because the ends could theoretically be damaged. So, in 1889, they went over to a line measure.

Since the measure was too important to be in the hands of a single party, it was decided to decentralize the storage of prototypes. So, copies were made and distributed to the calibration institutes in many countries. The history of the meter shows that decentralization and verifiability were important.

Thirty numbered copies were made of the prototype meter. The copies, also pejoratively called “billets” in Germany, were distributed to various countries. Germany received copy number 18 – the individual documents were drawn by lot.

Things became even more precise in the 20th century. From 1960, the meter was now combined with another unit. Thus, the wavelength of light gave the measure for the meter. Thus, the meter became not only easier to check but also dematerialized.

There was another change in 1983 when the speed of light became the reference quantity. Again, the new definitions were chosen to match the original meter as closely as possible within the limits of measurement accuracy.

Interestingly, Bitcoin takes up the problem solutions of finding the unit of length and thus the history of the meter. Even if it is not yet universally understood, the complexity of economic relationships, both spatial and temporal, makes an economic standard necessary.

Most importantly, no other currency serves as a valid economic standard because it lacks the crucial criterion: a fixed boundary. Moreover, since money is handed over in exchange for a service, it embodies a claim on the entire market, which is distorted if the total money supply is increased.

Like the primal meter, Bitcoin was the solution to a standardization problem. It is the first system representing a fixed unit of measurement that can be regulated and verified from anywhere in the world – standardized, decentralized, and dematerialized.

Even though an economic unit and a unit of length are similar problem areas, money is more problematic. Although all participants have identical interests in terms of length, anyone who distorts the money measure benefits.